New innovative concepts for sonar can arise from studying how nature has solved numerous problems helped by millions of years of evolution.

Here’s a question….what is the loudest animal on earth size for size? A blue whale (favourite answer of Alan Davies of QI fame)?….a snapping shrimp?….a howler monkey?....the neighbour’s new dog?....auntie Ethel’s parrot?..... It turns out the answer is a small aquatic insect with the grand name of Micronecta scholtzi.

This tiny underwater animal, the size of a coffee grain, produces sound which one can hear as you walk alongside a pond or canal in parts of northern Europe. This is astonishing when the impedance mismatch between water and air means that only 0.5% of the energy produced crosses the water/air boundary. The amount of power produced seems to be limited only by the fact that, if any more was produced, the animals would cook themselves! It is the males of the species that produce the sound who serenade the females who then flock to the loudest and most attractive noise.

Clearly this sound production is associated with breeding. It has been speculated that the males use their genitalia to generate the sound using a phenomenon called stridulation where barbed or comb-like structures are rubbed together . Crickets use stridulation by rubbing between their legs when producing their “songs”. The genitalia of the male Micronecta scholtzi appears to be particularly heavily barbed to ensure that the females don’t escape during mating (…..but that’s just biology……).

Researchers at the University of Strathclyde’s Centre for Ultrasonic Engineering (CUE) have collaborated with ATLAS ELEKTRONIK UK (AEUK) under a project funded by the MOD’s Centre for Defence Enterprise (CDE). Work under this CDE initially studied Micronecta scholtzi and its relatives to identify the mechanisms underlying the way the sound is produced by the animal underwater. Because it is an aquatic insect, the animal frequently comes to the surface and thrashes about to produce bubbles which it traps within its body in order to breathe underwater. While underwater, the bubbles appear to play an important and subtle role in the sound generation process providing resonances and interacting with the vibrational field surrounding the insect’s body as it conducts its stridulation.

Work continues to explore the phenomena with the aim to develop compact underwater transmitters for sonar applications. Another interesting creature is the parasitiod fly, Ormia ochracea. Here it is the female of the species with the phenomenal acoustic powers. This small rather beautiful golden-coloured insect appears to have uncanny hearing, capable of resolving the bearing of the sound produced by its prey, mole crickets, to a very high degree (main image). The mole cricket chirps away merrily to call for mates, again using stridulation. Unfortunately, the Ormia ochracea has an ear-like organ which allows the fly to “home in” onto the cricket’s burrow. The fly then lays its eggs on the cricket’s back and the rest is, again, …….biology.

Under MOD funding AEUK scientists studied the Ormia ochracea’s “ear”. What is remarkable is its capacity to identify the incident sound’s direction despite being much smaller than a typical wavelength. This “ear” is located behind its head and consists of rigid plates like a lady’s ruff in a Dutch Master portrait. The plates appear to be able to sense the minute change in phase of the sound as the waves pass the animal’s head, producing either bending or tipping of the plates or a linear combination. This behaves as an acoustic vector sensor rather than a simple microphone and intrinsically senses direction. 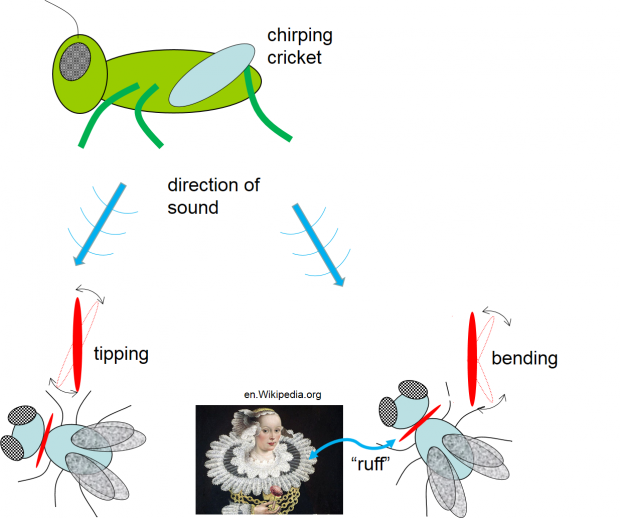 AEUK developed a class of compact devices inspired by this “ear”. In fact, the devices are one better than nature in that the “ruff–like” vector sensor is configured to sense the pressure scalar field via the electrical circuitry. This allows for the realisation of compact directional sonar systems such as towed arrays or sonobuoys, able to discriminate against the ambient noise more effectively.

Dr David Hardie is a leading authority on advanced sonar concepts. His work directly influenced the design of the ASTUTE submarine and in de-risking S2087, the Royal Navy’s latest sonar system. He was instrumental in developing low-cost modular sonars for submarines and surface ships and pioneered the use of sonar techniques for non-naval applications such as sono-chemistry.